From making your first LED blink to creating a musical instrument, physical computing can bring the ‘A-ha!’ moment into your Code Club.

If your Code Club is running within a school in England, you can hire a selection of physical computing kits from an NCCE Computing Hub for free.

Physical computing helps club members to build connections between the real world and programming. By designing, programming, and making their own creations, young people get the opportunity to learn about microcontroller boards, LEDs, inputs and outputs, and so much more!

The kits are designed so that you can get started straight away. No experience is necessary as you’ll have access to:

What are the kits?

The physical computing kits are available from the 34 NCCE Computing Hubs located at secondary schools across England. The kits are split into trays by type of device, and each tray is suitable for teachers to get started with physical computing at different key stages:

How can I borrow a kit to use at my Code Club?

If you’re a teacher in England, you can visit the NCCE Hubs webpage to find your local Hub, then contact them to find out what’s available to borrow. Each computing kit is generally available to use for up six weeks at a time.

If you’re a volunteer, you can still access the free Teach Computing Curriculum to use in your club.

I’ve hired a kit. How do I get started?

The Teacher Guide to physical computing kits provides a detailed explanation of all of the equipment and components included in the kits. It also has information about free teaching resources and training.

Each project has step-by-step instructions to help young coders and educators to learn and develop their coding skills together!

How have the kits been used?

More than two hundred trays have been loaned out since September 2021. Over 90% of teachers who have borrowed them say that they have used lessons and units from the Teach Computing Curriculum to teach with the physical computing kits, some during class time and others at after-school clubs, like Code Club.

Ian Cartwright, a teacher from Belvedere Academy, a girls’ secondary school in Toxteth, Liverpool, borrowed a tray of Raspberry Pi Picos to use at his lunchtime club with a small group of 11- to 12-year-old students. Ian started with five students and that quickly went up to a group of ten when they started telling their friends about making the LEDs flash. Ian said,

“[It’s] massively more engaging than programming Python on a screen — walking into a room with the box of kit grabs their attention straight away. They love the idea of building something physical, like a car. When the lights flash they ask whether they can take their phones out (but they’re not allowed to) so that they can show their mum and dad when they get home.”

Year 5 and 6 students from Purford Green Primary Academy in Harlow, Essex, told us about how they used Crumbles to make buggies drive around tables and control bridges to make them go up and down. When asked how using Crumbles compared with other computing activities, such as using Scratch, one student said,

“I liked the Crumbles because it helped me develop my block coding and make my bridge move. I couldn’t do that on Scratch.”

In February 2021 Sophie Hudson, a teacher at Linton-on-Ouse Primary School and Nursery, took the leap and launched her first Code Club!

Sophie shares what she has learnt from running online sessions and her advice on how you can get started with your Code Club.

If you’re ready to set up a Code Club in 2021, Sophie has three helpful pointers that gave her the confidence to start a club.

I completed the FREE online FutureLearn Prepare to Run a Code Club course. This really helped me to understand how to run a club and what I needed to do to get Code Club ready!

Take part in the Code Club meetups! Joining the meetup showed me that there is a great community ready to answer my questions, if I need help.

Admit when you are ‘learning together’. It’s been really good for the children to see me work things out and hear my thought processes. The Code Club projects are really useful and provide a clear pathway through Scratch and onwards!

I was worried that I wouldn’t be knowledgeable enough to lead a Code Club effectively, but I couldn’t have been more wrong — learning together has proven to be a powerful tool!

Don’t worry about new projects! I’m looking forward to getting into the Python/HTML projects with the more advanced club members. Now I’m accustomed to the projects, I feel confident I will be able to do this without getting into a pickle!

What were the highlights?

It’s been seeing the children’s progress! A few children started off needing me to talk through each step with them, but now they are often steps ahead of me! There are two girls who are quietly gaining confidence to stray from the projects and create something totally different. I’m pleased to see their confidence grow and the pride they have when sharing their projects.

What do young coders think of this new Code Club?

“I like that we can do it together and also we can do it on our own. My favourite project so far is probably the ghost game because I used a bat and made it my own. It was a bit tricky online to start [with] but it got easier as I did more projects.”

I was nervous to start my Code Club online, but in the end it was completely worth jumping in at the deep end! The children have really enjoyed it and now some of them can meet in the classroom, it is clear that they have been able to follow the projects themselves and learn so much from it.

Learn how you can go online with Code Club

Take a look at our ways to run a Code Club page for everything you need to know about taking your Code Club online.

Our researchers at Raspberry Pi work to help us understand how people are learning computing and digital making. They talk to children, volunteers, and educators about their experiences, while also drawing on the research of academics and other organisations. Here we summarise the latest piece of research they worked on with Code Clubs, and we hear from Oliver Quinlan, our Senior Research Manager.

In the Autumn term of 2017, the Raspberry Pi researchers worked with six school-based Code Clubs in England to try out a different approach to teaching programming. They wanted to observe the impact of ‘worked examples’: completed projects for the learners to explore, manipulate, and answer questions about. Their specific question was whether this type of teaching material encouraged collaboration between learners.

The six participating schools were split into two groups — one group was given six step-by-step projects structured very similarly to the standard Code Club projects, and the other group was given versions of the projects as worked examples. Both project sets covered the same concept: creating your own Scratch blocks (the Scratch version of defining your own procedures). The club members worked through these projects over several weeks, and in the final week, all the children from both groups got the same challenge to test their newly-learned understanding. Two of our researchers visited the clubs for this final session to observe the children and to interview the club leaders.

The researchers had two main aims: 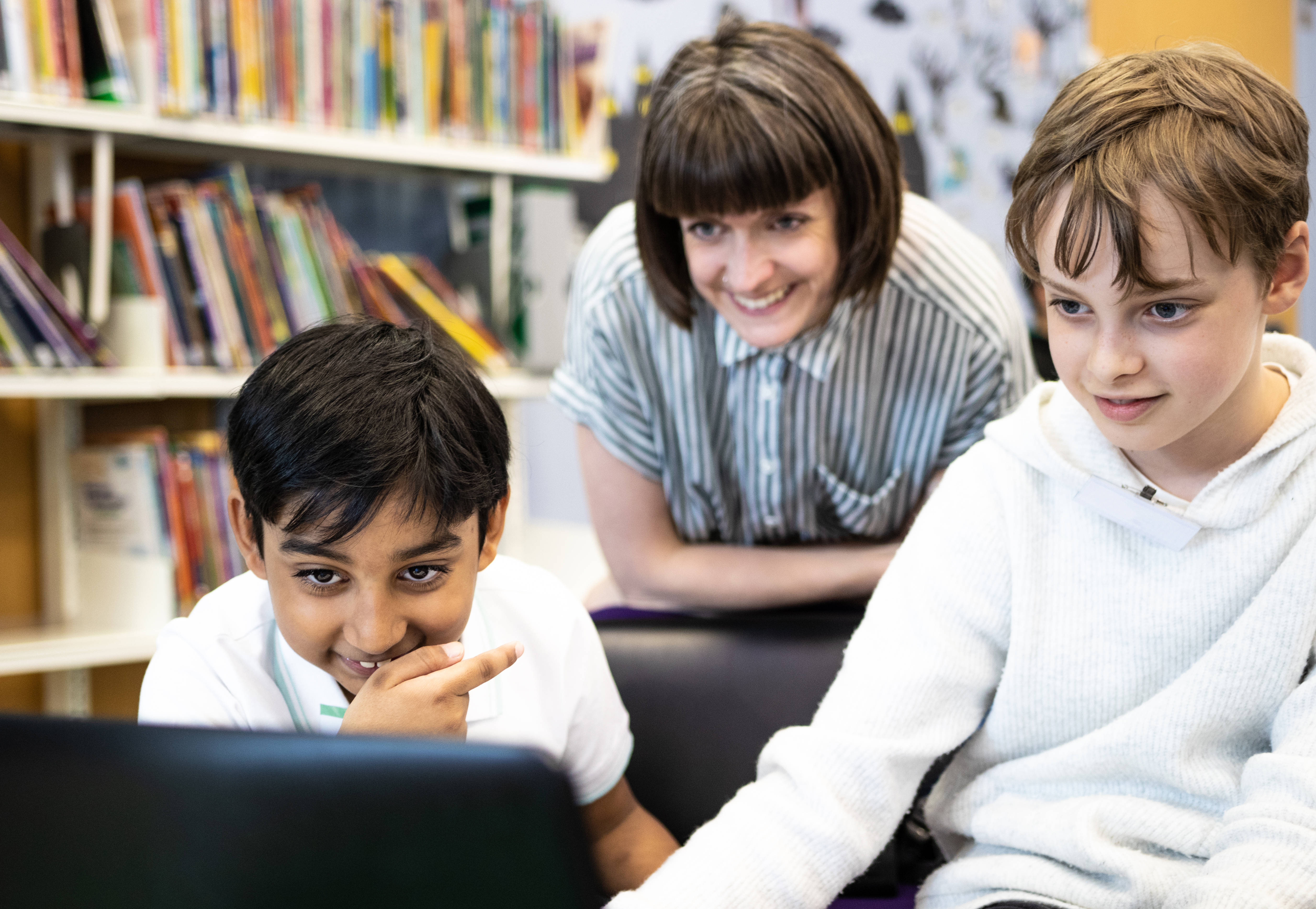 The researchers found that collaboration among the Code Clubbers was the same in the two groups — worked examples had no influence on how the learners worked together. In addition, interviewing the club leaders and observing the young coders gave our researchers insight into the obstacles to successful peer collaboration in Code Club.

“Making collaborative problem solving successful depends on the right combination of many aspects, such as educator support, task design, and group features. Achieving this combination is often challenging in practice, as we found from working with the schools in this project.”

Interestingly, one obstacle that they observed was that each club they visited had enough equipment to provide each child with a computer. This led the researchers to conclude that collaboration may be promoted by letting the children work in pairs using one computer. Oliver and his team also thought that Code Club leaders may need more support and information in order to facilitate collaborative problem solving among their learners.

“I think it was quite good for pupils to have projects that they were mending rather than starting from scratch. When you do that, sometimes you don’t get beyond choosing the background and putting the sounds in. So it’s good to start with having it all there, doing a bit of coding and then I’d say, OK, you can change the background. Otherwise they just get caught up in kind of drawing.”

On the other hand, the step-by-step approach to learning gives children the experience of building their own program from the bottom up. And since Code Club’s aim is to motivate and empower children to get really creative with technology to explore their own interests, being able to open a blank Scratch file and build a complete, unique project is crucial.

“[A] mix of worked examples and then doing your own problems might work better. The children get to see the possibilities this way, but I’m not sure they internalise the learning in the same way without building something themselves. I would like more of an alternating structure.”

Although this research did not show a true difference between the two types of projects in terms of collaborative problem solving, there are several things Code Club leaders can take away from it if they would like to encourage more collaboration in their clubs:

“Lots of children in clubs help each other when they are stuck, but there are other ways of collaborating too. Sometimes pairing children up with just one computer can encourage them to work together to think through their ideas. Showing them finished examples of programs can also really help them learn. It’s definitely not ‘cheating’ to have a look at someone’s finished project first — it can really help their understanding.”

Have you successfully encouraged collaboration between the children in your Code Club? Or have you tried out an alternative method of teaching that you would like to tell about?

Tweet us your ideas, or send us a message on Facebook. We love hearing about what the community is up to!