Sometimes working for Code Club can take you to unexpected places. For Liz Smart, Regional Coordinator for the North West, an encounter with a Business Connector in Lancashire led to her setting up a Code Club with HMP Kirkham.

Here Liz tells us about how Code Club is working to establish family ties between dads and their visiting children.

Last August I met the wonderful Maria Desmond MBE, who runs a number of community projects across Lancashire and works closely with HMP Kirkham. As we talked about family Code Club sessions, she asked me a question I wasn’t expecting: “Have you ever thought about running a Code Club in a prison?”

Setting up the Code Club

Things took off quickly from there. The amazing women at Partners of Prisoners (POPS) leapt at the challenge and quickly, Karen, Kayleigh, and Janet were on board as the first volunteers. Awesome Code Club and CoderDojo volunteer Lisa Brown pitched in with some refurbished laptops donated by her employers Bosch UK, and the prison security team helped to make sure the equipment complied with internal policies.

POPS provides support to help maintain family ties during an offender’s stay at HMP Kirkham. Our idea was to create a Code Club that young people could attend with their dads and where they could work together to code games and animations.

Just a few months after my initial conversation with Maria, we launched HMP Kirkham Code Club to coincide with the October half-term visiting days. The launch was a great success! POPs had crafted a fantastic display for the club space, and the dads and kids spent time working together on the Code Club projects. After the event, Maria said: “I can honestly say that in my 15 years’ involvement in prisons, I have never been quite so emotional. The men and their families were so hugely positive and proud of their kids — it was priceless.”

I can honestly say that in my 15 years’ involvement in prisons, I have never been quite so emotional. The men and their families were so hugely positive and proud of their kids – it was priceless.

Impact on the families

During the three visiting sessions that week, over 40 families attended the Code Club, and I was lucky enough to see the family engagement first-hand. The children started with Scratch projects — many had used Scratch in school and were excited to show their dads how they could manipulate the characters and get them to interact. They coded simple animations tailored to their interests and these acted as great conversation starters. One lad created a basketball animation, and his dad was amazed as his son proceeded to tell him all about his love of basketball.

One young prisoner couldn’t wait to tell his friends back in the block so that they could let their kids know they would have the chance to make computer games if they came to visit. He told me that some families have to travel a fair way on visiting days, so his friends’ children had stopped coming as often. He was convinced that having a Code Club would be the necessary incentive, and that they’d all enjoy it as much as he had.

One thing I didn’t expect was that, when a grandad thanked us for the session, he was clearly surprised that his young grandson’s mouse skills were better than his own! He also told us that he was able to use a trackpad for the first time, which he said would definitely help his employability skills.

The Code Club continues to run three times a week to coincide with the visiting days at HMP Kirkham. It is also inspiring others to follow suit and in the Midlands, where a prisoner with an interest in technology has volunteered to run his own Code Club during visiting times.

Start a Code Club in your community

Starting a Code Club where you live can have a huge impact on your community, and you don’t need any coding expertise to do it. Take the first step towards running a club at your local school, library, or other community venue today!

To learn more and find help with getting started, head over to www.codeclub.org.uk/start-a-club.

After becoming a Raspberry Pi Certified Educator at Picademy, the Raspberry Pi Foundation’s free face-to-face teacher training initiative, Kyle Wilke was inspired to start a Code Club to give students at his school and teachers in California more access to coding and making.

After attending Picademy, I was inspired to start a Code Club of my own in the computer lab at the school where I teach. The first week of the club, I introduced my students to Scratch, and we looked at project examples from across the community before starting to work through the Code Club projects. For the first two years I ran the club alone, and this year I reached out to our Parent-Teacher Association and was able to get multiple volunteers attending each session. Having volunteers has been a game changer for our club, and it’s great seeing them learn alongside the students!

Students love coming to Code Club to hang out with friends and learn how to code. When they leave, they are always telling me about how they will continue working on their project at home, or that they plan to buy a Raspberry Pi.

A favorite memory from my Code Club is when one student, a pretty shy kid who didn’t interact with many other students socially, jumped at the opportunity to become our first Code Club student mentor. During Code Club, I asked him to assist another child, saying that they were in good hands as the student mentor knew more than I did. The next week, when someone raised their hand for help and I started to make my way over, my student mentor popped up and said, “I’ll be right there, I know more than Mr. Wilke.” Hearing this new-found confidence was music to my ears!

Helping others start their Code Clubs

Once I’d experienced the joy of facilitating a Code Club, I knew I had to share it with the world and help train other teachers to get started. I currently help run Code Club training at conferences in the US, supporting teachers in learning to use Raspberry Pis and how to start a Code Club. In training sessions I always emphasise that the leader doesn’t need to be a computer science expert. You can learn alongside your students, and Code Club’s step-by-step coding guides allow the students to work at their own pace, with only limited adult instruction necessary. Educators always love how flexible the program is and how there are many different ways you can structure the club to work in your environment. 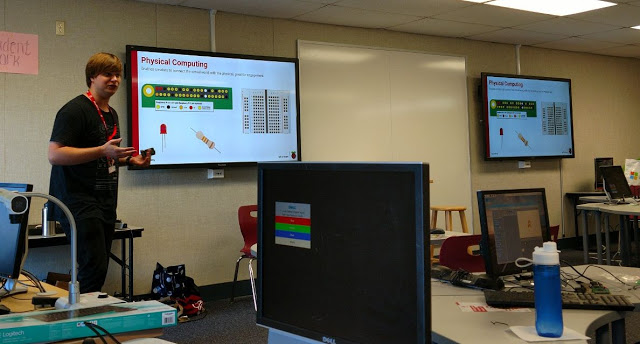 I spread the word about Code Club because of what it creates: on the surface, students are following coding guides and working on individual projects, but upon closer inspection, they are learning invaluable concepts like computational thinking and collaboration. Bringing a Code Club to your community creates a safe place for students to code, play, and learn together. Raspberry Pi Certified Educators like to say that Picademy helped them find their people — Code Club helps kids find their people, and their very own coding community.

Picademy sessions run throughout the year in the UK and North America. Keep an eye on the Picademy webpage or Raspberry Pi’s Twitter feed to find out when the next round is taking place. And if you don’t want to wait, you can sign up today for our free online FutureLearn course on preparing to start a Code Club here.

Wherever you are in the world, head to www.codeclubworld.org to find out how to start a Code Club in your community.

At Code Club it’s our mission to get as many young people interested in coding as possible. Here Dan Powell, Programme Manager at Code Club, talks about his experience with inspiring girls (including his daughters) to get coding.

When I was 12, my parents bought me a Sinclair ZX81, and ever since then I’ve been interested in computers, moving on to an Acorn Electron and getting a B in my Computer Studies O Level. I didn’t pursue a career as a programmer, and got an arts degree instead. Yet after a few twists and turns, I became a digital sound artist, and so I find myself writing Python now and again. Doing that, alongside my work at Code Club, means that coding still plays a part in my day-to-day life.

Why am I telling you this in a blog about getting girls into coding? Because I have two daughters, and I want them to feel the same way I do about the possibilities that coding offers: even if you’re not a professional coder, it’s still incredibly useful to know how to write some code. However, I’m very aware that despite everyone’s best efforts, including here at Code Club, there still aren’t enough girls going on to a career in programming. 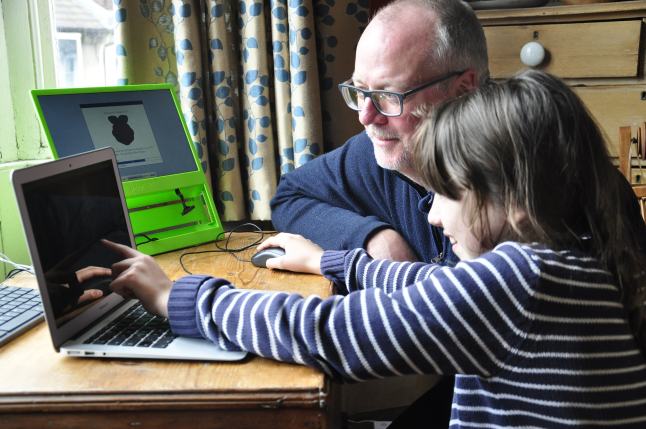 Dan and his daughter share a love for digital making

So what can I do about that? How can I help keep my girls engaged, and do my bit to redress the gender balance in the industry? As well as working at the Raspberry Pi Foundation, I also volunteer most weeks at the Code Club at my daughter’s primary school. The club was started by Wendy Armstrong, a freelance Full Stack .Net & Mobile Developer who shares my passion for getting girls into coding.

There are a couple of things that we have done at my Code Club to try and engage girls. First of all, having an amazing female developer like Wendy is incredibly powerful. She is a huge inspiration to the girls who come to our club, proving to them that coding is not just for boys. One thing I know from working for Code Club is that girls often drop out when other clubs come along. That doesn’t really happen at our club, and I’m certain that it is because we have a great role model for them. So if you’re a female programmer, and even if you don’t code for a living, please think about volunteering at a local Code Club. 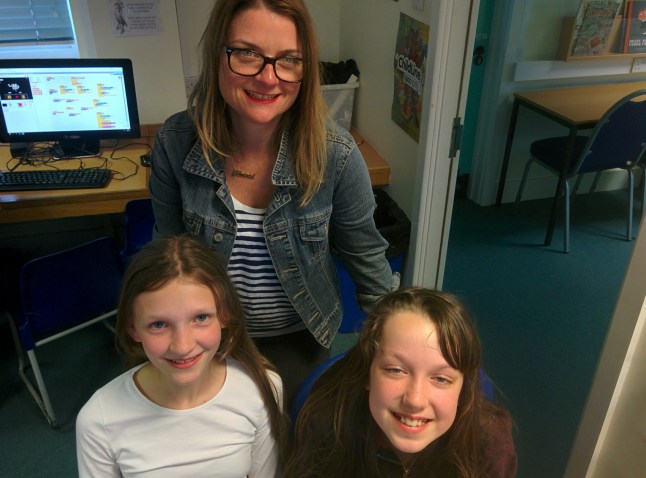 Volunteer and developer Wendy with some Code Clubbers

The second thing we do is to reserve half of the spaces in our club for girls, and when Wendy does an assembly at the start of the school year, she actively encourages girls to apply. These means our gender balance is 50/50, which is where we want it to be. We think there are fewer opportunities for girls to get into coding, and we believe that prioritising girls at our Code Code goes some way towards addressing this.

One piece of evidence I can offer is my eldest daughter — she loves Code Club, and she even runs drop-in Python workshops at the Raspberry Jam I help organise. I asked her just now if she’d be as into coding if it wasn’t for Code Club and having Wendy as a role model. She said she wouldn’t be, and that’s all the proof I need.

Inspire girls to code by starting your own Code Club

Do you feel passionate about getting more young people coding? By starting your own Code Club, you can make a real impact in your community. Find out more on our website www.codeclub.org.uk.