Back in 2015, a school email about Code Club led to Mart becoming a volunteer. With three volunteers and a classroom of kids who wanted to get coding, Mart tells us how their Code Club was born.

Our Code Club runs in the eastern suburbs of Victoria, Australia, with numbers that have varied from 30 to 99 kids over the last few years. At the club, members learn how to implement their ideas with code and hardware, and articulate their process by presenting in front of different audiences. We’ve presented our projects at parents’ nights and assemblies, shared our micro:bit MicroPython plant project at an Expo, and our kids have even had the chance to perform demonstrations at Parliament House!

Using activities in your Code Club

We’ve used various activities to help develop the children’s skills, and had real success with a ‘devs and testers’ group: the children chose to work as either developers or testers, and collaborated in teams to fix and develop projects. Students used a three-column system to document their issues and bugs, decide the tasks they needed to work on, and list everything that had been completed. We watched as they decided to nominate one person to merge their fixes and features to avoid conflicts, and came up with the idea to nominate team leaders to help manage everyone. After two weeks, it was great to see the number of completed issues and look at the positive interactions between students. 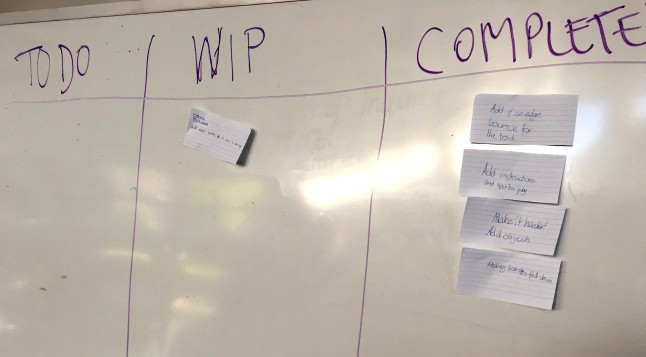 We also used an adapted activity from Al Sweigart’s book Scratch Programming Playground where students worked to design and make a coding game by first drawing it on paper. This was an exercise in patience, as students were so excited that they ignored the drawing stage and rushed ahead. One student, Ajay, came to me when he found he was getting confused, and we went through the drawing process, discussing which code would be used for each sprite. When Ajay realised how drawing everything out helped to make his next steps clearer, it was like a light went on!

Other memorable moments in our Code Club include two of our students who won prizes in a Scratch competition: Darren with a game where the player was a fish trying to eat other fish, which he’d been working on since starting Code Club; and Jamie with a complex platform game that challenged players to solve puzzles and achieve goals by running and jumping.

In past years, we’ve brought in teachers from across the school to volunteer at Code Club sessions on a rotating schedule, while our Assistant Vice Principal and club founder, David, oversees sessions each week. We have a few parent volunteers, but as we have progressed, the majority of our volunteers are actually former Code Club students that have ‘graduated’ and returned to the club. Our first student volunteer is now leaving Code Club to get a job!

My top tip for running a Code Club is to be proactive — don’t wait for children to raise their hands, but instead make sure to always ask them how they’re doing and what they’re working on. Make sure to talk through what you’re doing when you’re helping kids to debug their work, so they stay engaged and learn the process of asking what isn’t working, what should the code be doing, and which part of the code isn’t working. Above all, empower kids to show their school, family, and friends all the things they’ve made in Code Club. If you’re thinking of starting a Code Club, have a go and do it!

Everyone can start a Code Club!

From coding beginners to tech geniuses, anyone can start a Code Club! Find out how you can help children in your community learn to code at www.codeclubworld.org.