This week we speak to Jenny Riley, who shares her experience of setting up and getting started with Code Club.

Read on to learn how Jenny has structured her first few sessions, and about the impact Code Club is having on the children involved.

In December last year, I approached the headteacher at my children’s primary school to ask if they would start a Code Club with me as their volunteer. As an undergraduate computing and IT student, I love programming, web design, and the endless possibilities that technology can bring. I wanted to share my passion with others and inspire the children at our school by showing them that they can do these things too. 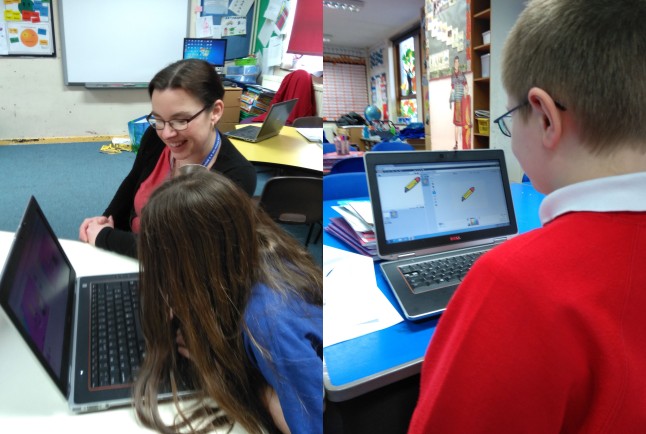 Together with the deputy head, we launched our Code Club in January and have been overwhelmed by its success so far. We wanted to start small, so we offered ten places for our after-school club. These were immediately filled, with other students asking when they would be able to join.

I was very nervous at our first session, but the students were so excited that they soon calmed my nerves. As the children had already done some Scratch programming, we decided we would ease ourselves in by beginning with the Scratch module 1 projects. This worked well, and over the next few weeks, we quickly got into a routine.

The children have a wide range of abilities; some use Scratch at home, and some had only ever used it once or twice. To avoid problems with students getting bored or finding it too difficult, we allow them to work at their own pace. The more confident students are racing ahead, while others take a couple of sessions to complete a project. Some are enjoying it so much that they continue to work on their projects at home! 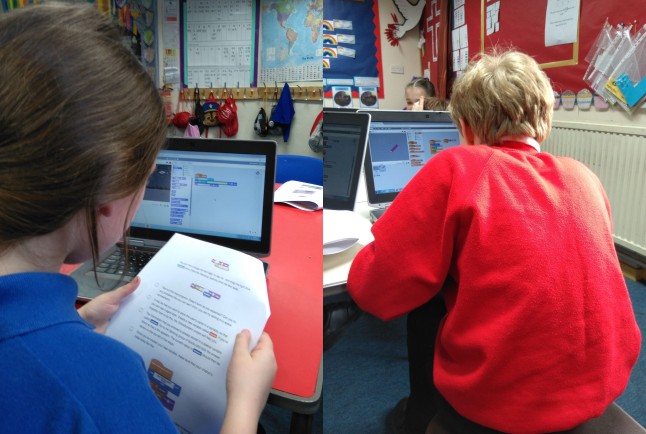 Now we are even setting additional challenges. During one session, a group of students found they had the ability to record and play back sounds, but since we had no headphones available, the session soon got very loud. At the next session, we decided to set them a challenge: we don’t mind you using sounds, but they have to be used within a program. The students rose to the challenge, and by the end of the session we had a fully working animation of a beatboxing, breakdancing boy, complete with audience applause.

After only a few weeks, we could see the confidence and independence of the kids soar. As soon as our students arrive, they know what they are doing and get to work. They are happy to tackle challenges that we set them, and they are always looking for ways to improve their projects. As a club, we avoid simply telling someone the answer if they are stuck, and instead encourage them to investigate or ask another student for advice. The students are always happy to help others out or sit down for a spot of ‘buddy-debugging’.

When I set out on this journey, I wanted to inspire the children, but it turns out it is the students who are inspiring me. I am amazed by their ability to just ‘give it a go’, even things they have never tried before. They don’t get disheartened if something doesn’t work, and they are always willing to help a friend. So even if they don’t go on and become computer scientists, I know that being part of our Code Club is helping them learn important life skills and is giving them the confidence to explore.

Jenny is one of thousands of volunteers who help us on our mission to inspire the next generation of digital makers. You don’t need special expertise to start running your own Code Club, and you can get started today at www.codeclub.org.uk/start-a-club!