Castlewood Code Club were not messing around when they decided to enter the latest Astro Pi competition. To prepare for their aviation-themed experiment, they set out to Gatwick Airport, where they went on a private tour of a Boeing 777.

Read about the adventures of this ambitious Code Club whose experiment will soon be travelling to space — talk about a meteoric rise!

When Castlewood School Code Club in Horsham decided to enter the Astro Pi competition, they needed to come up with an idea for an experiment. Around the same time, club volunteer Gavin Hewins discovered that teacher and club host Sharon Burchett had previously worked as an aircraft maintenance engineer for British Airways — the same role that Gavin has with British Airways today. An aviation-themed Astro Pi experiment therefore was a natural choice! 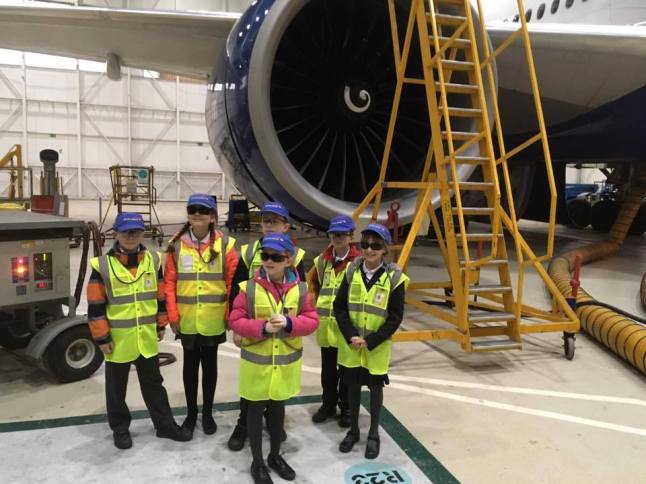 Astro Pi’s Mission Space Lab is a competition that gives students the opportunity to design code experiements to be run on the International Space Station (ISS). Therefore, Castlewood School Code Club planned an experiment to compare life in space with life aboard a Boeing 777. This required the children to develop a basic understanding of the sensors, computers, and equipment aboard the aircraft. Given this, Gavin approached British Airways about bringing the Castlewood Astro Pi team (or team STEAMCademy, as they are better known) to visit an aircraft at Gatwick Airport.

On 9 January, an excited team STEAMCademy arrived at Gatwick Hangar 6, where they began their internal tour of G-VIIR, a British Airways Boeing 777-200. In the flight deck, the kids learned how to read sensor data using the aircraft’s onboard instruments and computers. Then they had a go at ‘flying’ the aircraft by inputting data into the autopilot and observing the resulting movement of the control column. The kids also explored the Main Equipment Centre below the cabin floor, and checked out the many computers a Boeing 777 needs to fly. The computer that attracted their attention most was the Air Data Inertial Reference Unit (ADIRU) — basically a very big, very heavy, and VERY expensive Sense HAT!

The Code Clubbers continued their education with a tour of the cabin, where many ceiling panels had been removed, allowing them to see components that are normally hidden. This included the famous Black Boxes — which are in fact coloured orange! They also had a good look at the In-flight Entertainment System, in particular the animated map that would be relevant to their project. Finally, Gavin gave team STEAMCademy a tour of the aircraft’s outside, focusing mainly on the external sensors that supply data to the ADIRU.

The 90 minutes in the hangar flew by, leaving the children hungry for more information. The whole visit was a great experience for them, and proved invaluable to their Astro Pi entry! Castlewood Code Club is very grateful to all the people at British Airways who helped make this visit possible.

Update: we are really pleased to say that the club’s entry for Astro Pi’s Mission Space Lab was successful, and their code will soon be on its way to the ISS!

Ready to take off?

Being part of the Code Club community is about so much more than our projects! If you want access to lots of extra opportunities for your club, including competitions and swag giveaways, then make sure that you have activated your club.

Check out this article to find out how to get activated. You can also reach out to us on Twitter, Facebook, or email us at support@codeclub.org.uk if you have questions.