Earlier this month, we celebrated Code Club’s fifth birthday. Over that time we have grown from 25 clubs to a network of over 5,000 active clubs in the UK and many thousands more across the world. That’s only been possible thanks to the fantastic work of our community of volunteers and educators, and the enthusiasm of parents and young people. Thank you.

We know from the many messages and feedback we get that kids, teachers, volunteers, and parents all get lots out of their involvement with Code Club. You also help us make Code Club better. We work hard to listen to your feedback and that leads directly to improvements in the way that we support Code Club through our projects, training, and much more. 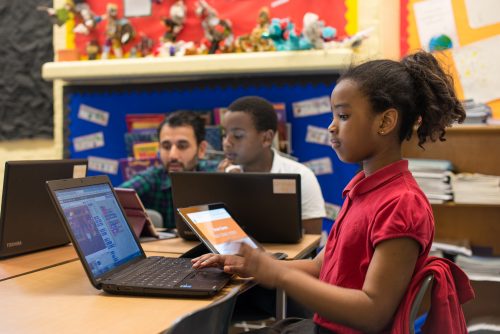 We are also committed to formally evaluating what we do. That’s why, between June 2015 and September 2016, we worked with the National Foundation for Educational Research (NfER) on a randomised control trial that explored the benefit that Code Club has on children that participate. As far as we know, this is one of the only randomised control trials of an after school programme focused on computing. We are very grateful to NfER for conducting the research and to Nesta and the Cabinet Office who provided funding to allow this to happen. We’re also extremely grateful to all of the teachers and young people who helped us by participating in the trial.

The trial worked with 21 schools that set up Code Club as part of the trial. Children who said they wanted to attend the Code Club were randomly assigned to either attend for the year of the trial, or to attend in the following year. That way everyone got to benefit from Code Club, but the researchers were able to measure what impact attending a Code Club had compared with a control group.

The trial showed that Code Club had a significant and positive impact on children’s programming ability in all of the programming languages we use: Scratch, HTML/CSS, and Python. Teachers said that Code Club improved children’s skills and confidence in programming, as well as general ICT skills and problem solving, and many teachers also reported the benefit of being able to use the confidence and skills of Code Club children to support other pupils in lesson time. The research also highlighted how easy it was to set up and run a Code Club, with lots of positive feedback for the resources and projects that we provide.

The trial has also given us lots of good feedback to work on. What do we mean by computational thinking and how can we support volunteers and teachers to teach those concepts in an engaging way? How do we get better at managing the transition from visual to text based programming languages? How can we most effectively identify and spread practice between Code Clubs?

Over the coming months we’ll be reviewing the findings of the research in depth and using them as a springboard for further improving the support that we give to teachers and volunteers that deliver Code Clubs in the UK and around the world.

You can download the full evaluation report from the Raspberry Pi Foundation Research and Insights page.