If you’re a teacher looking to boost your digital skills and coding confidence, then running a weekly after-school Code Club could be for you. Starting a Code Club is a great way to develop your knowledge of key coding languages such as Scratch and Python.

Code Club provide all the resources you need to get your club started – including step-by-step projects which provide the content for each club session.

There are loads of teachers across the UK who are already running Code Clubs. Jill Sim is one of them, who runs a Star Club at Rosebank School in Dundee. We spoke to her to find out more about how easy and rewarding running a Code Club can be.

Before I started my Code Club I considered myself quite computer literate, having used lots of different software and programs with children over the years. However, I had never done any coding, it looked scary!

I first heard about Code Club through Twitter, and I thought it looked like a good club to start after school. I knew the school already had Scratch on our PCs but I hadn’t delved into it too much. When I first started the club, I was a bit apprehensive, until I saw how well the children took to it.

I have been running the club for nearly two years and we have up to 27 children in year 5 and Year 6 attending. In the first year I sent home a Code Club flyer and talked to each of the classes about the club. After that, word spread and I didn’t need to do any advertising, and this year we had so many applications, we decided to run two days a week so that we didn’t have to turn anyone away.

In our club we have 16 PCs and 3 Raspberry Pis – each child has their own machine to work on. Within a few weeks of getting the club up and running, I found that the children all learnt at their own pace. We cover all three of Code Club’s project curriculums – Scratch, HTML and Python – the children are free to choose what they want to work on. Some prefer to stay with Scratch, others move on and dabble with HTML or Python – at which point I get a bit lost, but it doesn’t worry them.

In the early days I ran through the projects at home the night before, but now the children know better than me what to do and the older ones will always guide others who need help. I used to print out the projects, but now they work from a PDF on screen. I just make sure all the downloads they need are on our shared drive. 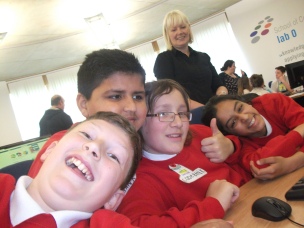 Code Club teaches the children tangible skills: logic, problem solving as well as graphics and sound. Being methodical and breaking things down into steps, changing steps if things don’t work – failing in a safe environment – these are all important lessons for life. I also love the way they help each other and share their discoveries. I’m very proud of my coders, because they turn up every week and work hard for an hour after school. The atmosphere is always calm, purposeful and happy!

There have been many fantastic Code Club moments over the years. Being runners up in Dundee City Schools’ Code Jam last year was a highlight. It’s always great to see the children persevering, getting help from others, fixing their code and being delighted with the result.

I think all the children benefit from Code Club in terms of their ICT skills, but also socially and emotionally. We have some children who don’t go to any other club, so it’s really important to them. I have an ex-pupil from last year who rushes here from the High School every week to help me with the club. It has given him a huge boost in confidence, he absolutely loves it.

Code Club has given us a sense of shared achievement as a school. The club members know they have raised the profile of the school and are especially proud to be a Star Club – they like welcoming visitors and explaining their creations.

Keen to learn more about running a teacher-led Code Club? Read more experiences from other teachers who have started their own clubs.

You can also find out useful tips for getting started by joining our Twitter Chat on Wednesday 8th June, from 8-9pm.