When a Code Club is formed we ask the volunteer to complete a short survey for us in the first session so we can find out a bit about the club. So far 150 Code Clubs responded, out of 393 registered clubs. That’s a 38% response rate, which is excellent for surveys.

Those 150 clubs had 2,233 children. If we extrapolate this across all 393 Code Clubs, we get just over 5,800 children in Code Clubs across the country.

The clubs come in all sizes, with most clubs having 10-20 members. There are a few smaller ones, and a few clubs with over 45 people! We assume that these are in-class initiatives where Code Club is incorporated into normal lessons.

The gender split is amazing, too: 40% of Code Clubbers are girls, with 60% boys.

This is an amazing uptake in girls, especially as computing-related undergraduate programmes typically attract about 12% women. All this was done without any mention of gender in any of the Code Club materials. Let’s hope that the gender split continues to be at least this good in future.

Less than a quarter of the Code Clubbers have done any programming before, with most of them (one in five of the total) having some experience with Scratch. 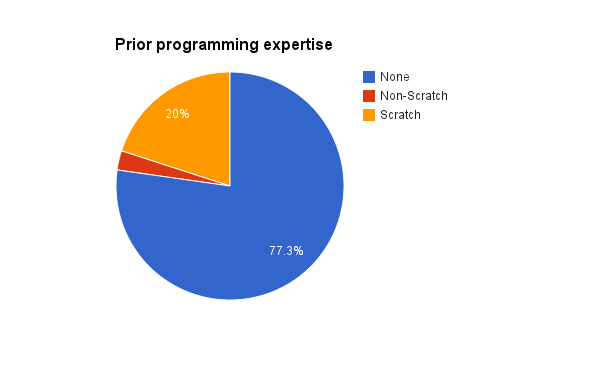 Extrapolating that out over all 393 Code Clubs, that means some 4,500 children have had their first taste of programming, thanks to you.

You can look at the original data (anonymised) in a Google Drive spreadsheet).

At the end of term one (end of the autumn term 2012) we asked all our Code Clubs to tell us how they had been getting on via another survey. These surveys are very important for us, as they allow us to see what’s working and what’s not. The end-of-term survey has already pointed out a few things we could do better, and we haven’t yet fully analysed the results. We can also use the results of the surveys to show potential sponsors and other funders how widespread and successful Code Club is, and how much of an impact it’s having.

We’ve not analysed the end-of-term survey yet, but from our first look things seem to have gone really well. I’d like to share a couple of quotes from the survey.

“The pupils enjoyed the project and were keen to keep working when I wanted to go home!”

“We have had a fantastic response from all pupils in the club and already have a reserve list for when we repeat the club next term.”

“A couple of pupils that are known to be quite disengaged from regular maths and science in school have flourished in Code Club, and taken well to it.”

A lot of you have mentioned the burden of producing all the worksheets in colour. We’re looking into ways we can reduce that.

We will soon be contacting volunteers about doing some short interviews about your experiences with Code Club. Once we’ve looked at the data in detail we’ll tell you more about what’s been happening.

It’s really great to hear your stories and feedback, whether through the survey, by direct email, or through avenues like Twitter. It means we can change the way Code Club works to suit the people we created it for.

Keep talking to us at support@codeclub.org.uk

By Neil Smith – Computing department at The Open University

One thought on “What happened in term one?”