The first Code Club hack day was over 8th and 9th December, and it was a resounding success. The brief was to design and build a project, using a Raspberry Pi, that schools could do in a Code Club session or two. It should use a Raspberry Pi computer and only other equipment that schools could expect to have to hand, or could get for under £75 (a feasible target for fund raising).

The hack day was hosted by the kind people at Nesta and sponsored by the Raspberry Pi Foundation, The Open University and Free Agent.

At around 11.00am on Saturday, people started drifting in and introductions were made. Co-founder Linda Sandvik and volunteer Adam Onishi kicked off the day, with Rob Bishop from Raspberry Pi dishing out loan Raspberry Pis to all the teams. People quickly gravitated into teams, thrashed out what they were doing, and the hacking began! After an hour or so, we had a quick “elevator pitch” session where people gave a quick idea about what they were doing. This allowed us to check that no-one was doing anything too similar, and ensured everyone knew who was doing something similar and could trade ideas and hacks.

The rest of the day was pretty much heads-down, with everyone working feverishly on their hacks. Arduinos and Scratch GPIO featured in many of the projects. Throughout the day, strange artefacts were built, torn down, and re-built better; people stared into the middle distance as ideas formed; conversations abounded, comprised equally of words from English and the index of an Adafruit catalogue; burritos and goat balti wraps were eaten; and the raspberry juice flowed like water.

The pace slowed overnight as people drifted to bed, either at Nesta or their own homes, though a few stalwarts stayed hacking away even in the wee hours.

The work returned to fever pitch in the morning, as people filled the last few hours before judging with final tweaks and more than one complete rebuild. In the end, the nine projects to be judged were (in not particular order): 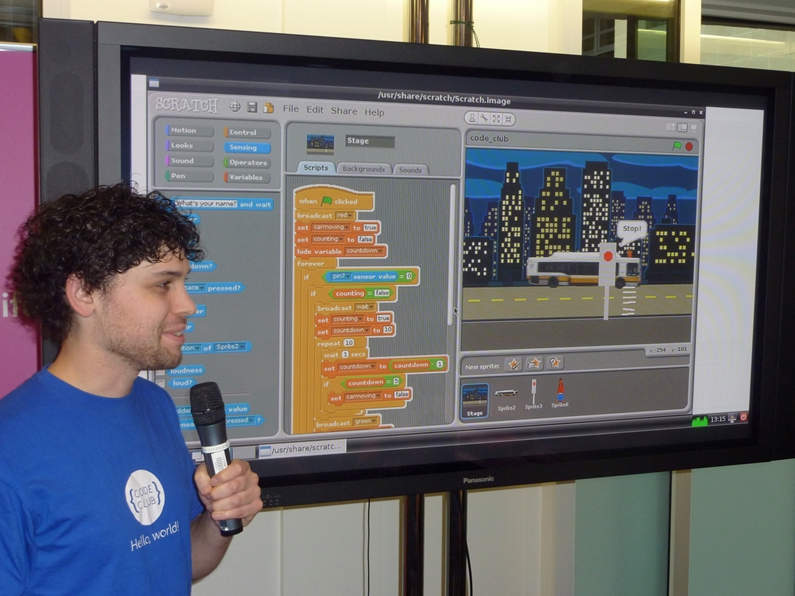 * Team Blinkey made BlinkeyIO, a web based remote control for the Raspberry Pi GPIO using an Apache server running PHP. Using that, they created a simple tool to teach children logical bitwise operators (AND, OR, XOR, NAND).

* Hair Razors made S.I.A.N.O.R., an art installation with motors to make lots things that spin, with variable speed motors, gears, a home-made switch, fans, hair, and a people whacker.

* Team Miniband made Miniband, a mini-set of drum kit, guitar and maracas you can play with your fingers. Photos on Flickr and code on Github.

* The Puffins made Pelican Crossing, a physical computing project using the Raspberry Pi’s GPIO pins to control two LEDs and a switch. Pressing a button on a physical traffic light makes the traffic light LEDs to change colour, the cars on the screen to stop moving and a boy to cross the road. Check it out here.

* Team Squawk made Squawk, A twitter style webserver running on Raspberry PI that allows remote control of the GPIOs.

* Blocks made the Lego Fun Fair, a miniature Merry Go Round controlled by a motion sensor. When motion is detected the Merry Go Round spins, and stops when it goes quiet.

* Team “I need a group name?” made PiBooth, a small Processing app that allows kids to create and apply filters to photos. It also allows them to take their own photos.

* The Team With No Name turned the Raspberry Pi into a wholly-illegal 100MHz FM radio transmitter, using no additional parts except for a wire as an antenna.

* Another Team With No Name made a simple 3D printer, controlled by a Raspberry Pi.

Rob Bishop from Raspberry Pi Foundation with the judges

All too soon, 12.00 rolled round and the judging began. In a stroke of genius, Linda had realised that the projects were for children, so the judges should be children. Who better to say what would interest the Code Club constituency? The three judges turned up just on time proceeded to tour the projects. Demonstrations were made (and failed), notes were taken, and much thought was applied. After some deliberation amongst rob and the judges, the awards were:

Most suitable for a Code Club: Pelican Crossing and Miniband

And there was much rejoicing, with pies, raspberry swiss roll, and high-fives all round!

Our enormous thanks to all our sponsors and everyone who took part. Many congratulations to all the winners.

You can read some other reports of the day, including one from Tech Fruits with a photo gallery on G+ and a video on YouTube, a post from Josh Emerson and one from Neil Smith, some photos from Nat Buckley and Charlotte Spencer’s post on day one. Tweets from the day used the #codeclubpihack tag.
If you have photos or write-ups of the day, please let us know in the comments.